This was the statement the wife said to her husband when he returned home. He could see that his young daughter in the corner of the room was in trouble with her mother. He could also see the carpet cleaning supplies out in their living room and a giant pink stain on the carpet. The three-year-old daughter had poured out her fruit juice out all over the carpet.

The couple knew how vital it was to have the people over to their house. But that large stain in the living room bothered her. She didn’t want the stain to be the center of attention when the group assembled. The husband thought they could buy a rug to cover it or jokingly mentioned that they could place the coffee table over it.

The couple decided on cleaning it the best they could, hold the meeting at the house and overlook the huge, noticeable stain on the floor. They considered the BIGGER picture was more important for the others than what they thought about finding this visible carpet stain.

We’ve all been this couple.

We have all decided at different times we didn’t have it “all together” enough or that what we had, wasn’t significant enough. In whatever situation we encountered, we tested ourselves and thought- were not impressive enough to make an impact. It doesn’t appear to be at a professional level. Inadequate. We look to compare at what we possess and weigh it against the flashy sparkle of this world. Don’t lie. Yes, I’ve done it and I know you have too. Our current engagement levels prove this to true. We are not using what we have because we consider it- Not good enough.

Know about the account of the miracle of the feeding of the 5,000? If someone asked you to do a monumental feeding task of feeding all these people and then presented you with five loaves of bread and two fish, what goes through your mind? Eh, impossible, right? Why would a kids’ lunch even be considered against something so big of feeding so many people? A seed. Small things matters to God. All it took was a small offering of something to produce that BIG harvest.

God doesn’t ask us to serve others from out of our amazing abilities or abundances. We are asked to serve BECAUSE we have been served, not based on what we possess in our own ability.

Let the weak say they are STRONG. 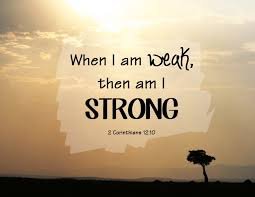 Look at what was written in 1 Corinthians 1:27‭-‬28. But God chose those whom the world considers foolish to shame those who think they are wise, and God chose the puny and powerless to shame the high and mighty. He chose the lowly, the laughable in the world’s eyes—nobodies—so he would shame the somebodies. For He chose what is regarded as insignificant in order to supersede what is regarded as prominent…

God picked the nobodies, the puny, the powerless. I think this can qualify anyone.

God’s most significant resources to fulfill His mission is people. All kinds of people. People who

are doing a lot and people who are doing little to nothing– and churches are filled with passive spectators rather than active participants.

My point – Let’s stop you from doing nothing into something. Let’s get you active doing even something small instead of watching from the sidelines. You can contribute no matter your ability, financial status, or your significance. Don’t look at yourself to determine your qualification. Make a quality decision today; you will do something and stop doing nothing.

One thought on “A little is all you need”